Shenzhen’s ‘made in China, sold on Amazon’ dreams undercut by merciless crackdown

Shenzhen’s ‘made in China, sold on Amazon’ dreams undercut by merciless crackdown

‘Made in China, sold on Amazon’ business model runs aground in Shenzhen

Patozon has not disclosed its specific losses from the Amazon move as it is now privately owned, but its recent decision to put all of its research and development (R&D) employees on suspension for six months has created uncertainty over its viability.

By submitting, you consent to receiving marketing emails from SCMP. If you don't want these, tick here

According to an internal notice, seen by the Post and verified as authentic by a Patozon employee, the company suspended its research and development team for six months effective August 6.

Employees will receive 80 per cent of their salary in the first month but for the remainder of the suspension, they will only be paid 80 per cent of the minimum wage set by the Shenzhen government, according to the announcement. The city’s minimum wage for full-time workers is 2,200 (US$340) per month, which means the affected Patozon employees would get 1,760 yuan, well below their normal rate.

“Since April, the company has endeavoured to save ourselves in the past few months … but we are still facing a series of challenges and pressure in inventory transfer and cash flow. We need to make adjustments in our strategies, so we have to make some tough decisions,” according to the statement.

It marked a change in tone from when the first round of Amazon store closures happened just three months ago. In early May, Patozon said it was “optimistic” as it kept in close communication with Amazon over the restoration of its suspended stores. “At present we are operating normally, and our cash flow is normal,” general manager Liu Yongcheng, a founder of business, said in an open letter to employees at the time.

Patozon’s pain is spreading across the “made in China, sold on Amazon” community, as thousands of online stores backed by mainland Chinese merchants have been shut down since May, according to the Shenzhen Cross-Border E-commerce Association, a trade group representing their interests.

Juozas Kaziukenas, the founder of Marketplace Pulse, a New York-based e-commerce research firm, wrote in a report in early July that the suspended Chinese sellers represent “a tiny share of the total number of China-based businesses on Amazon” but the closures “sent shock waves through the Chinese seller communities”.

Specific reasons for the stores being closed remain undisclosed, although they came at a time when Amazon was cracking down on abuse of the customer review system. Amazon bans merchants from bribing consumers to leave positive reviews, a common practise on Chinese e-commerce platforms.

In May, Amazon said that it suspended some seller accounts for abuse of the reviews system. “Our actions generated a vocal response and we wanted to take a moment to be clear – the rules are the same for every seller, regardless of their size or location,” Dharmesh Mehta, vice-president of worldwide customer trust and partner support at Amazon said in a statement.

Amazon’s crackdown has left a bitter taste in the mouth of Chinese merchants and even , with the ministry of commerce referring to the incidents as “growing pains” from a “new form of trade”.

At the same time, the Shenzhen government told merchants that in the disputes with Amazon, preferring to remain “neutral” in the matter, the Post reported.

Businesses like Patozon represented the new faces that made the Chinese export machine even more formidable during the Covid-19 outbreak. Their key advantages – quick design and instant manufacturing – remain in place despite the Amazon crackdown.

On a recent visit to Patozon’s head office, the company presented an image of a sleek tech start-up rather than an old-school manufacturing business, with its reception area decorated with trophies and certificates won in design competitions.

Amazon, which now sells more merchandise than retail giant Walmart, is a key channel for Chinese merchants to reach end consumers in developed countries. China-based sellers represented 75 per cent of new merchants listing on Amazon in January, a significant increase from the 47 per cent in the previous year, according to Marketplace Pulse.

There is even a thriving local business in Shenzhen of people teaching merchants how to open and operate stores on Amazon.

Before it was privatised, Patozon’s listed owner reported the unit had sales of 4.9 billion yuan in 2020, up 44 per cent year on year, with a net profit of 318 million yuan. It has 260 million consumers across the world, including all platforms.

One of the most recent store closures on Amazon was from Shenzhen Youkeshu Technology, which sells products such as electronic gadgets, toys and outdoor equipment. 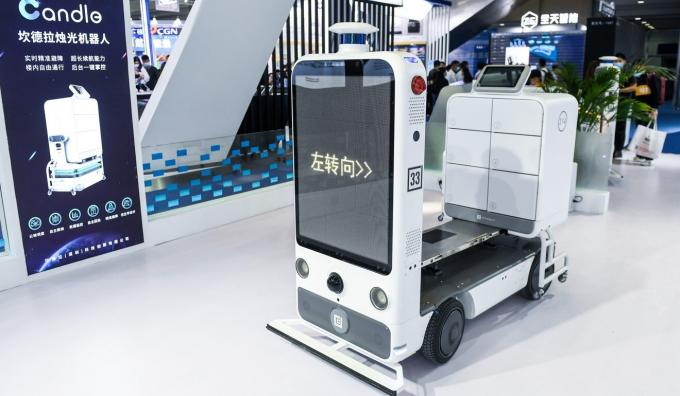 A delivery robot is seen at the 22nd China Hi-Tech Fair (CHTF) held in Shenzhen last year. In the first half of 2021, Shenzhen’s total exports rose 19.4 per cent from a year ago. Photo: Xinhua

The company said in early July that 340 of its stores on Amazon were closed and about US$20 million in funds frozen, dealing a heavy blow to its business. As a result, the company’s total payroll halved to 1,400 by mid-July from 2,800 six months ago.

Wang Xin, president of the Shenzhen cross-border merchant association, that few stores have succeeded in their attempts to get the ban lifted and their inventory returned by Amazon warehouses.

Detailed economic data on the impact of the closures on Shenzhen is not available but the crackdown does appear to have slowed the city’s export momentum. In the first half of 2021, Shenzhen’s total exports rose 19.4 per cent from a year ago, but that was nine percentage points lower than the national average in the same period.

As Amazon has turned hostile for some merchants, other platforms such as eBay and AliExpress, a subsidiary of Alibaba, are stepping in to offer alternatives. The Shenzhen government is also encouraging merchants to develop independent websites to sell their products, and is providing a 2 million yuan subsidy for qualified merchants that do so.

That is of little help to Patozon as its misfortunes with Amazon continue. Beginning last week, its Amazon stores for the Litom brand of solar lighting products became unavailable.

Get in touch with us